Tai Chi is an ancient form of mind/body exercise rooted in the unique Spiritual Philosophy of Taoism. This is best summed up by the famous Yin/Yang symbol which reflects harmony, balance and perfect relationship. 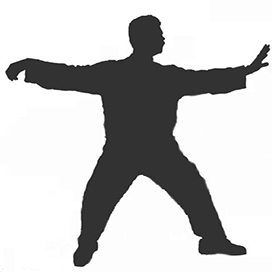 Tai Chi is a practical application of this theory and is therefore a perfect antidote to the negative effects of modern life. The practice itself involves subtle postural alignments combined with mindfulness training. It promotes a return to deep natural breathing which improves the flow of Qi [energy] to the internal organs.

The nervous system relaxes and releases stress, leading to a profound feeling of well-being. The Tai Chi Form is a moving in and out of specific body positions in coordinated patterns. The movement is slow, precise and pumps energy around the body releasing blockages and strengthening weaknesses. It also has a Martial aspect and can at the advanced levels function as a self defence method.

Qi Gong is a modern term for ancient Chinese Taoist exercises “Dao Yin”. These range from sitting, lying, standing to walking, moving, and dancing forms. Dao Yin/Qi Gong can trace its origins all the way back to prehistoric times. The term itself literally means Energy Work. That is learning to work with one’s own energy, and also with the relationship of one’s own energy to others and the environment.

A variety of Tai Chi and Qi Gong movements will be introduced over the course of the 12 weeks. As exercise forms, Tai Chi and Qi Gong suit all people regardless of age or gender. Students should wear loose fitting clothing and bring water to each class.

Laurence started learning basic Qi Gong from Gary Collins in 2005 with The Jade Sun School. He also had the opportunity to practice Tai Chi whilst living in The US, and soon after coming back to Ireland began the 2-Year Teacher Training Course in Tai Chi & Qi Gong with The Jade Sun School. Prior to studying Tai Chi and Qi Gong, Laurence completed the Jade Sun School Syllabus in Spiritual Development and also became a qualified Solar Sound Healer. Laurence has also been an English Teacher for 8 years which has given him a good foundation in terms of teaching Tai Chi and Qi Gong.